Goats are the hip new thing in eco-friendly weed management 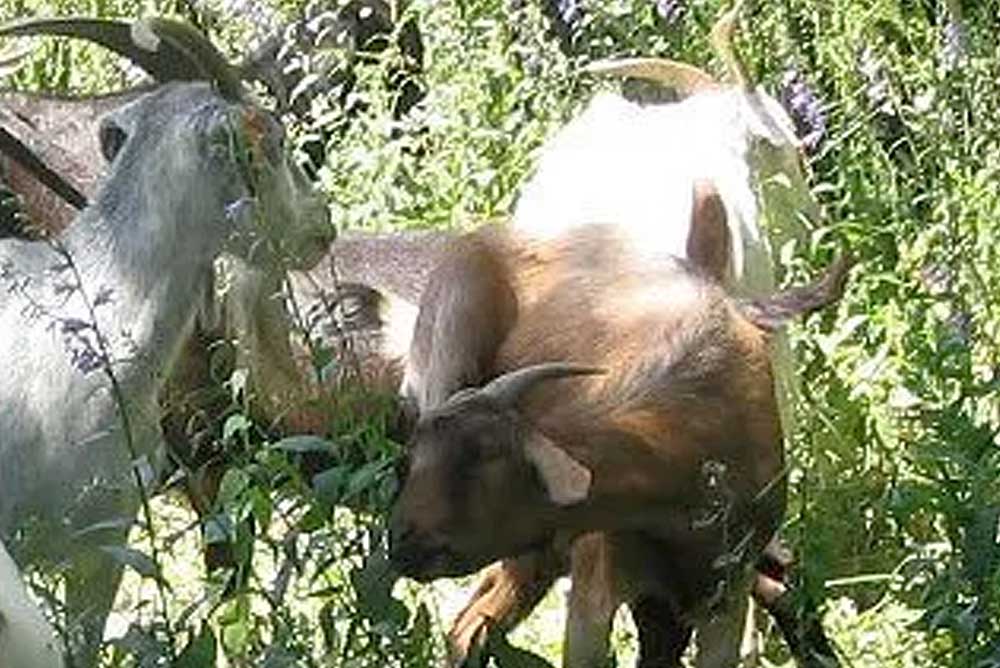 Using goats to battle weeds is gaining popularity in the West, where noxious and invasive plant species are pervasive and poor management has left a lot of land in bad shape. In the inland West, the grand dame of goat-herding is Lani Malmberg, whose herd of 1,200 has no home base but goes from one job to the next, migrating from Colorado to Wyoming to Idaho and beyond. Malmberg holds a master’s degree in weed science.

“There’s a lot of awareness now of what chemicals do to the environment,” says Malmberg, who believes we are on the cusp of an “age of environmentalism,” current federal government policies notwithstanding. “Plus, they’ve been using chemicals against weeds for 45 years, so there shouldn’t be a weed on this planet. Obviously, it’s not working and they’re looking for something else, a logical way to slowly heal the land.”

Enter the goats. Technically, goats don’t graze; they browse. They’ll eat brush, leaves, twigs, and other such food first, only turning to grass when there’s nothing else left. Goats also don’t munch each plant down to a nub and move on. They’ll pick off the flower heads so the plant can’t go to seed, and eat the leaves so it can’t photosynthesize. But they’ll leave the stalk, which holds the soil in place, preventing erosion. With only a bare stem left, the plant has to work overtime just to stay alive, giving native or more desirable plants a chance to grow. Goats also poop a lot, and as they roam, their tough hooves stomp the pellets into the soil, fertilizing and helping to soften Colorado’s hard clay. They also irrigate a pint at a time, with nitrogen-tinged urine that helps balance the minerals in the soil. And, notably, they’ll eat just about anything, including plants that are poisonous to other animals.

Even outside the world of organic farming, biocontrols and other environmentally friendly weed-control techniques are beginning to take root in the collective consciousness. From old-school push lawn mowers to carefully cultivated insects, alternatives to harmful herbicides and polluting weed whackers are becoming more readily available as awareness of sustainable gardening grows.

“We’re asking, ‘What is the true cost?’” says Malmberg, considering the impact on the planet of spraying toxic chemicals versus running goats or using other eco-conscious methods to wipe out weeds. “It’s a slow change. We’re on the crest of it but it is in motion.”