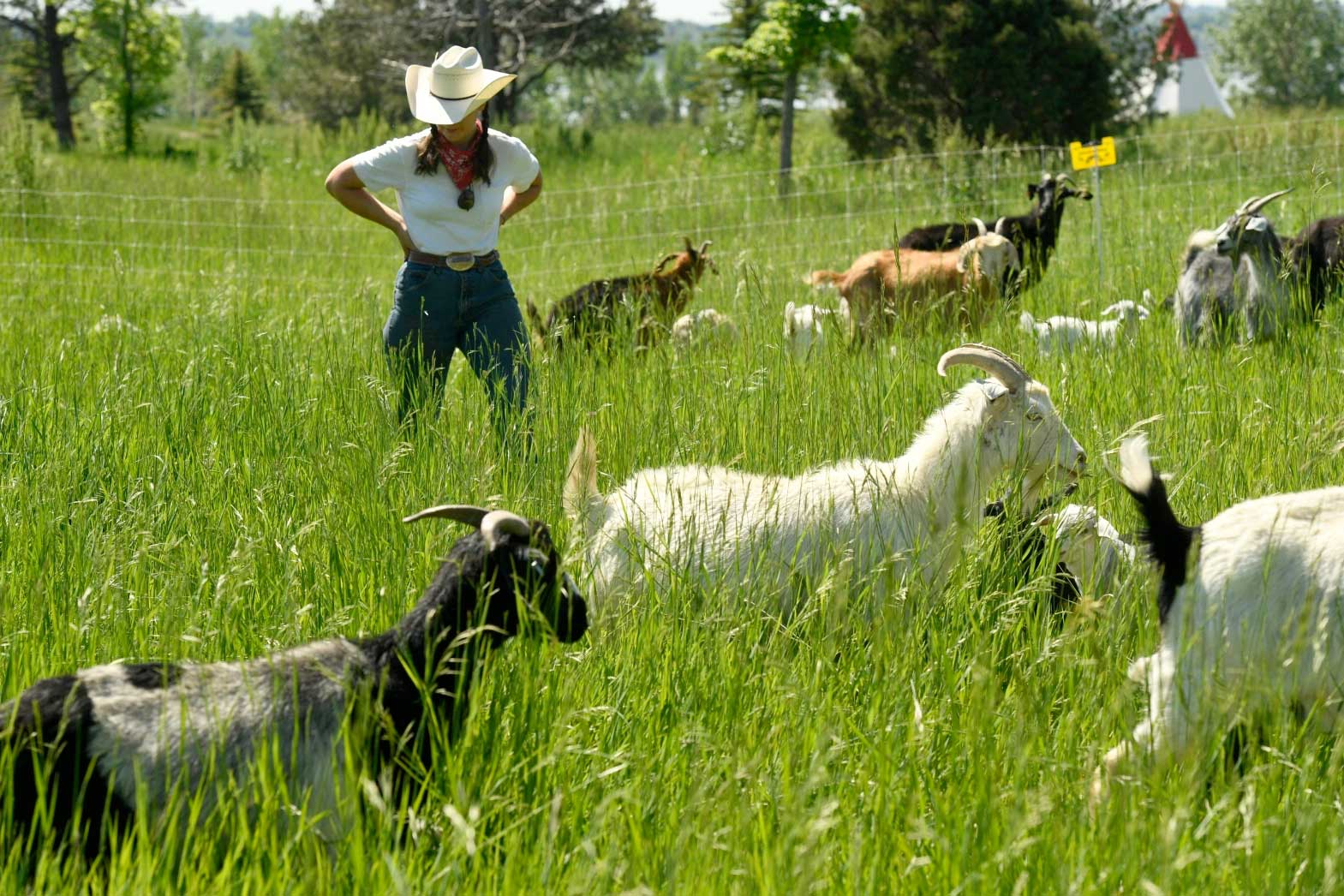 WESTMINSTER, COLORADO – JUNE 8: Goat herder Alexi Wattis watches over some 200 goats and their kids at Standley Lake Regional Park and Wildlife Refuge on June 8, 2021, in Westminster, Colorado. The goats are from Goats Eat Weeds a Fort Collins company that goes to sites across the Front Range providing weed-eating services using their goats. The goats provide a natural and non-toxic way of controlling weeds because they are able to eat a variety of weeds. (Photo by Helen H. Richardson/The Denver Post)

An unusual animal story turned heads this week at Standley Lake Regional Park. And for once, it wasn’t the famous bald eagles that live there.

Some 200 hungry goats — 75 nannies and 125 kids born this spring — were busy at work eating weeds and entertaining onlookers. While they certainly were adorable, especially the little ones, they were doing the serious business of battling noxious plants and improving the soil in the process.

“Weeds are symptoms of over-grazing or unhealthy soil,” explained Alexi Wattis, who was herding the animals owned by Goat Green, a Colorado company that has 1,500 goats working year-round on jobs across the West. “With the goats, by pooping and peeing, they’re building up the nitrogen content in the soil. They’re also aerating the soil (with their hooves) when they’re moving across it. After a couple of years, you really start to see the weeds disappear and healthy grasses come back in.”

Wattis called it “non-toxic weed control.” Under her watchful eye, the herd munched on tall bushes called curly dock and other weeds in an area enclosed by a portable electrified fence intended not only to keep them in but also keep humans and animal predators out. Adjacent to the enclosure was an area that the goats had previously worked over. Four-foot-tall curly dock plants had been reduced to bare stalks.

“Goats are browsers, not grazers,” Wattis explained, glancing at the area where the goats had worked earlier. “You can see there’s still a lot of grass left, but the curly dock, they ate all of the leaves and started getting the seeds out. Goats are great for weed control because their mouths are so small and their teeth are so sharp, they crush the seeds of the weeds. So when they poop, the seeds don’t get pooped out. Goats also can eat weeds that cows and horses can’t eat, that are poisonous to them.”

“Everything we own has four legs or four wheels,” said co-owner Lani Malmberg. “We go where the work is.”

Malmberg founded the company in 1996 after studying environmental restoration, botany, and biology at Colorado Mesa University and earning a master’s degree in weed science at Colorado State.

“This was my idea when I got out of grad school,” Malmberg said. “All of these goats are born, lived every day of their lives, and died with me. Those babies are our 27th generation … and (each herd) worked every day of their lives. They trust me and I trust them. We’re a team. They have to do their part. I telepathically tell them, ‘You do your part, or you can’t be on my team, you’ve got to go be a pet in someone’s corral.’

“This herd is living energy,” Malmberg said. “It’s alive, as compared to a lawnmower or a weed eater or a tractor.”

The kids working at Standley Lake this week were all under 2 months old. They may not have been pulling their weight in terms of how much they ate, but they sure were cute.

“The babies are just kind of exploring and figuring out what their moms are eating and tasting things for fun,” Wattis said. “They’re not actually doing a ton of the work. The moms are doing most of the heavy lifting because they’re all still nursing.”

Last year, Malmberg created the Goatapelli Foundation, a non-profit “dedicated to land restoration in the era of changing climate extremes.” Goatapelli aims to promote soil rehabilitation with goats, reducing the use of herbicides while teaching new goatherds how to do it. Wattis is an apprentice and is paid through the foundation.

“We’re offering this opportunity for people to reconnect to the land,” Malmberg said. “Young people like her are three generations disconnected from the land. There is a thirst to get reconnected, and we’re offering that as a viable career.”

In college, Wattis studied classical history with a focus on Athenian democracy. Now she’s learning about goats, living out of a camper parked wherever the goats are working.

“I think it’s really special to be able to spend time with animals outside,” Wattis said. “And with the land, seeing the changes we can make.”