Have goats, will travel

Bone-dry dirt crunched underneath Lani Malmbergs boots as she walked across a 65-acre stretch of land just west of Mercy Regional Medical Center. Only a few withered tumbleweeds managed to hold onto the barren area of dirt that has been the unfortunate victim of drought, unsustainable grazing practices, and a now sparsely populated prairie dog town.

But if Malmberg is allowed to work her magic, she said, in three years the land will look as lush as a golf course. 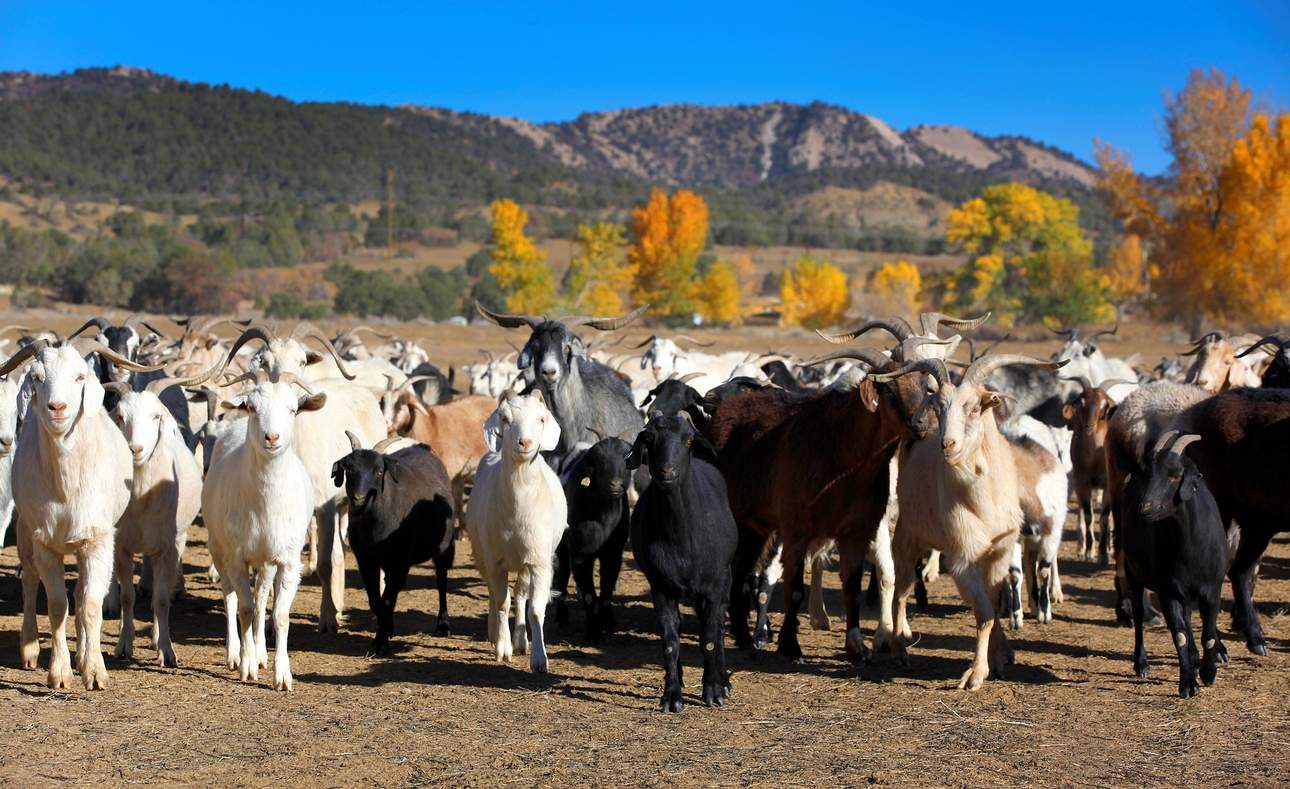 Malmberg is the co-owner of Goat Green, a company that uses goats to manage unwanted vegetation and help recondition soil. Malmberg and her 29-year-old son, Donny Benz, travel the western half of the country together with the goats, going wherever they’re needed. The goats have been used for weed management, erosion mitigation, reseeding, soil restoration, and fire-fuel reduction.

Theyre a living, moving landscaping machine, Malmberg said. The goats provide an alternative to machinery and chemical herbicides, she said.

The company is in the middle of a three-week endeavor to bring the soil back to life on the barren patch of land in the Grandview area. The property is owned by Kim Crader Buffalo, but Chevron Corp. operates a well there, and it is paying for the operation to assist the landowners efforts to improve the land, according to an email sent by Chevron spokeswoman Cary Baird.

The impetus for the revegetation efforts came when officials from the county and the Colorado Oil and Gas Conservation Commission reinspected a Chevron-owned holding pond located on the Crader property. The holding pond, used for exploration and production wastewater, was grandfathered into a statewide rule governing those waste-management locations. But when a riding arena was built across the road, officials decided Chevron needed to bring the pond into compliance with the states security, fencing and signage requirements, said Karen Spray, the commissions Environmental Protection Specialist.

The pond wasnt being put to much use, so Chevron decided to close it and reclaim the land, Spray said. Chevron is moving away from the use of holding ponds in its operations across the globe, Baird said.

Chevron decided to expand its reclamation work beyond the pond and hired Goat Green to do the work. The company has used Malmberg and her goats on other projects in Wyoming and the Piceance Basin near Grand Junction.

In addition to Chevron, the company has done work for city and county governments, the department of defense, federal public lands agencies and private operations. Malmbergs prices range from 50 cents per goat per day to $5 per goat per day.

For the Durango job, the goats take daily five-plus mile walks around the open space on the property. They nibble on shrubs, trees and weeds that are unpalatable to most grazing animals. As they meandered through the hills and gullies behind the hospital, the goats scrambled up and down the steep hillsides to nibble on the sparse scrub brush and Gambel oak.

This is perfect goat country. Horses and cattle wouldn’t survive out here, Benz said as he walked behind the goats.

As they eat, the goats ingest and digest the nutrients and minerals stored in plants around the area. Weed seeds also are destroyed by going through the goats digestive tract. Then they come back and release those elements in their feces and urine, boosting soil health and preparing it for new plant growth. Part of Malmbergs job is to direct those nutrients to specific locations by herding the goats to walk and bed down in certain areas.

As they walk around the barren area, the goats tiny hooves till the soil, breaking up the grounds hard drought-stricken crust and working in the nutrient-rich goat poop.

Were infusing a giant shot of living energy that feeds the microbial activity below the soil, she said. 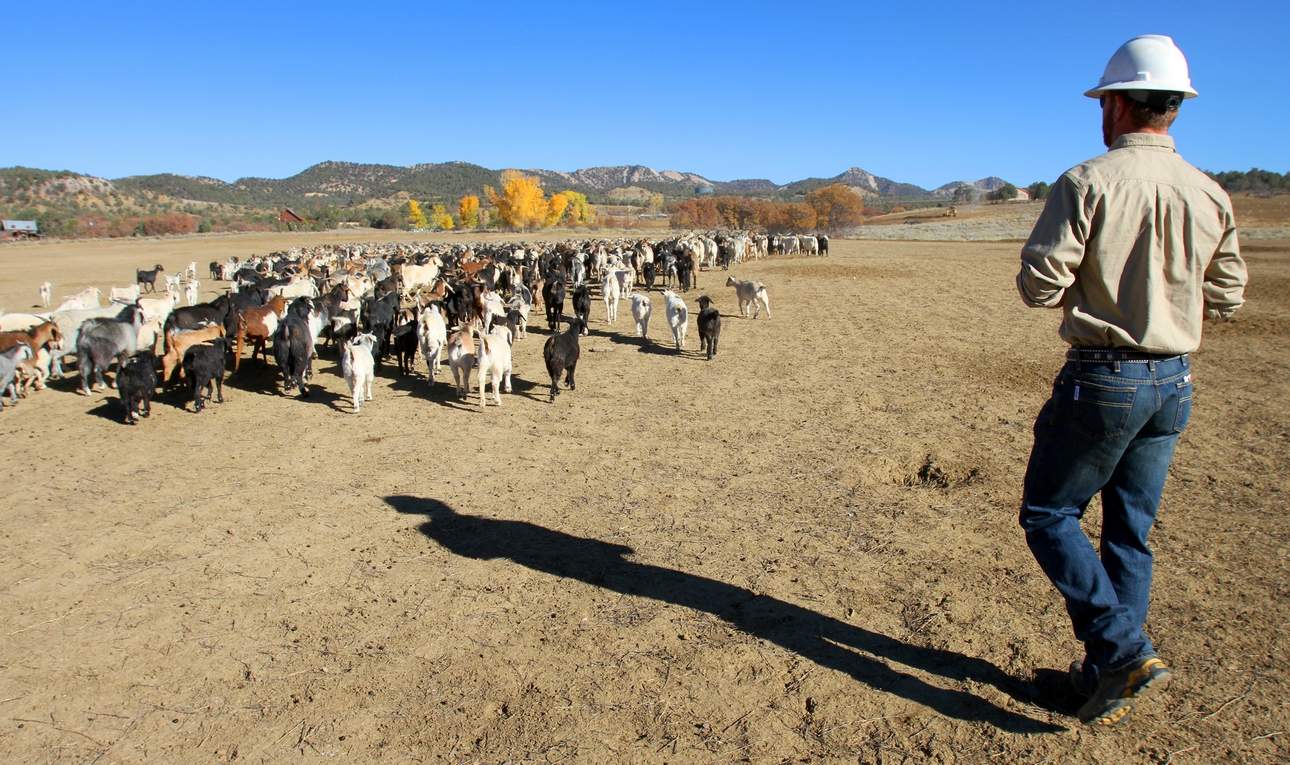 At the end of their contract, Malmberg will reseed the area with a mix of legumes, yarrow and native grasses that should start to germinate this spring, assuming they get enough moisture this winter.

Goat Green also is doing work for Three Springs. The goats are browsing on undeveloped land owned by Three Springs to help with weed reduction and fuels reduction in forested areas. Then Goat Green will do revegetation work on a parcel Three Springs is planning for future development, said Kurt Prinslow, planning manager.

When shes done, Malmberg and Benz will load the goats onto semitrailers and move on to the next job. Malmberg calls herself the gypsy goat lady, though with her hard hat, sun-bleached hair and jean shirt, she looks better fitted to climb onto a construction site than amble among goats.

Shes also a business woman, well-practiced at pitching her service.

This is one-stop shopping, she said.