Cyclists and runners along the Rio Grande Trail are seeing a different kind of wildlife this month. The Roaring Fork Transportation Authority has hired a herd of goats to eat weeds along the path from Glenwood Springs to Emma.

Colorado has 78 species on the list of noxious weeds that landowners must, by law, control.

“And goats eat every single one of them,” said Lani Malmberg, self-proclaimed gypsy and 21-year veteran in the goat herding business. “They like all the poisonous weeds, they like anything with thorns on it.”

Malmberg and her son, Donny Benz, run the company Goat Green, and their herd of 210 goats will be browsing — not grazing — along about 10 miles of the Rio Grande Trail.

“A grazer eats all grass, that would be a cow and a horse,” Malmberg explained. “A goat is a browser — grass is their last choice. They prefer trees, brush, weeds.”

Which, she said, makes them ideal candidates for projects like this. The goats will spend this month eating weeds at top priority areas along the popular path. They eat constantly, more than a quarter of their body weight every day, and, as Malmberg puts it, quickly recycle those plants as fertilizer.

Malmberg said there are many ways to measure the success of the goat experiment.

“Species diversity. Water held in the soil – you can measure that. Soil organic matter. Nutrients in the soil,” Malmberg said. “And then, over time, there’ll be no thistle here, but instead there’ll be other desired broadleaf plants.”

RFTA workers have been seeding the ground ahead of the goats, so all those hooves work the seeds into the soil.

A few more fun facts about goats: They have an enzyme in their saliva that allows them to digest serious poisons, like hemlock. They have four stomachs. When they move, it looks a lot like a school of fish, sharing a bite each of all the weeds and shrubs and circling around as a herd. All goats have horns, and they use those horns to sweat and regulate their body temperature. And, they only have bottom teeth. 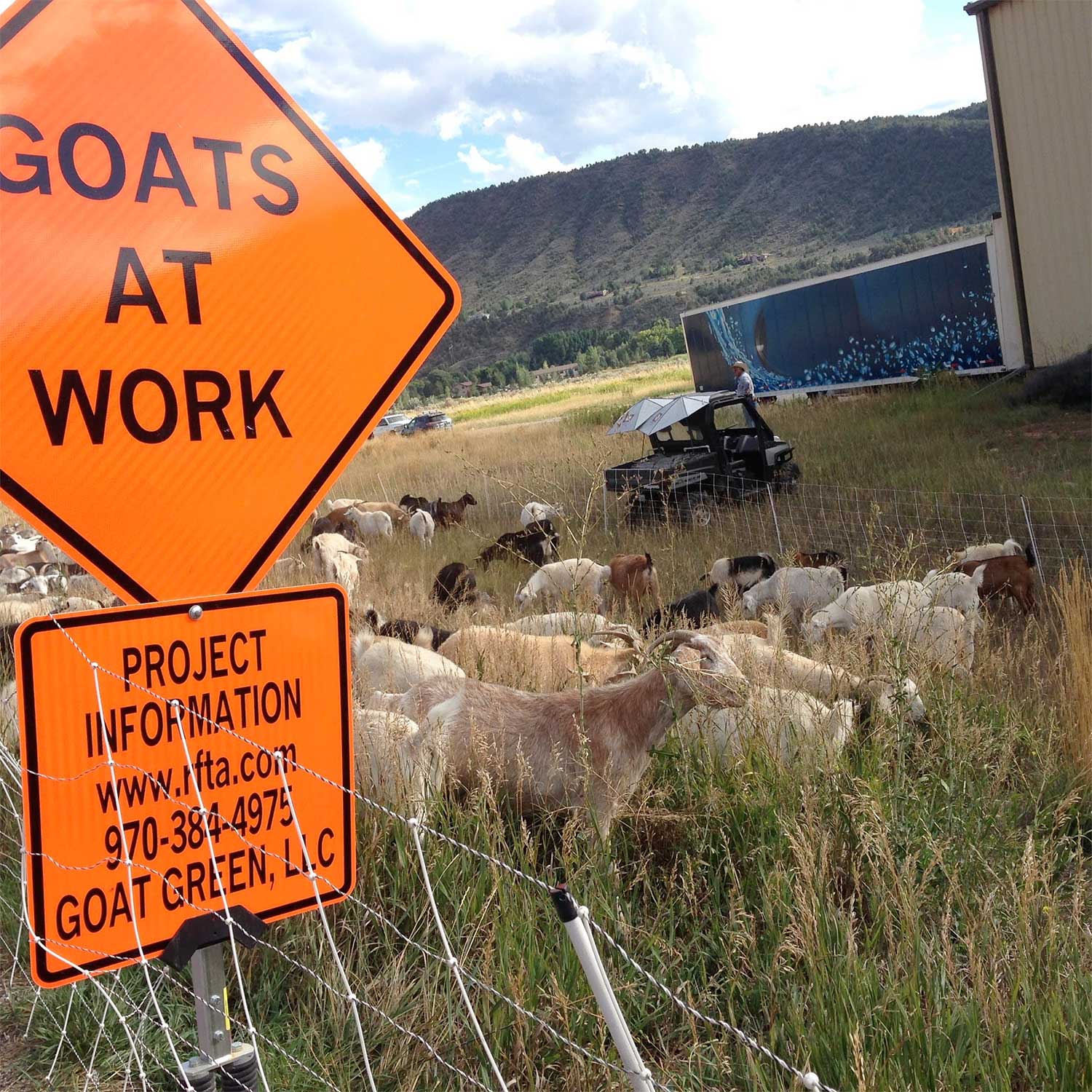 Malmberg’s herd works every day of the year somewhere in the western United States and is comprised of cashmere goats – the kind that produce the world’s finest wool.

Those thistles are a major part of RFTA trail manager Brett Meredith’s job. He estimated that workers in his department spend more than half their time on a never-ending battle against noxious weeds.

In the past, Meredith has used that bright blue chemical spray, shooting it from a backpack or a big truck tank. Last summer, RFTA workers used 464 gallons of herbicides, and Meredith estimated the total cost of the efforts at $60,000.

He does not enjoy that work, and he said he’s not seen improvement in the four years he’s been on the job. So when he heard about these goats from a colleague in Blaine County, Idaho, Meredith jumped at the chance for a change.

“They have an old railroad corridor, so it’s very similar: 20 miles, about 100 foot wide, and they had done this project,” Meredith said. “He told me it was just as successful as spraying, and that’s all I needed to hear. I was like, ‘ok, we’re doing this.’”

The idea of using goats as a form of weed control is not without its skeptics. Gary Tennenbaum, assistant director of Pitkin County Open Space and Trails, said his department has tried goats, without much success.

Meredith acknowledges that this is a slow process.

Malmberg agrees, noting that this type of weeding requires a shift in thinking.

“When people think of weed control, they think of spraying and mowing usually, where you would try to go kill something,” she said. “So, it’s a different paradigm where we’re trying to build life and a chemical would be trying to kill something.”

It will be years before the full benefits of all those goat mouths, stomachs and hooves take effect, so the contract with the goats is for three years at $40,000 a year.