Goats: A Natural Alternative to Herbicides

Munching on everything from leafy spurge to knapweed and thistles, the goats are a natural—and more thorough—than herbicides.

By Dina Mishev | Town of Vail 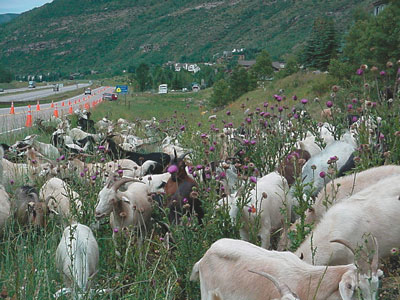 “Goats are self-propelled units that are able to go where no machine can and few humans dare. Goats work during all seasons, in fair weather as well as when it is windy, dark, snowy, raining, and on all major holidays,” Lani explains. “And they’ll eat anything,” says Lani’s husband, Fred Lemming, the former supervisor of the Teton County, Wyoming, Weed, and Pest Control District. “A goat is a total farming machine.”

The goats do much more than merely eating weeds. “The goats are full-service,” Fred says. Using no fewer than 500 goats on an acre, the Lammings implement high-intensity grazing for short periods of time. In addition to removing weeds, the goats also aerate the ground with their hooves and tread in the native plant seeds the goats drop. The goats’ manure and urine fertilize the soil. No longer competing with weeds, native plants are able to suck up the nutrients. “Goats are just such beautiful animals and can help the land so much more than herbicides can,” Lani says. “After three years, the land being managed by the goats will look better than any land treated with herbicides.”

Using goats for weed control is often less expensive than using herbicides. Although using goats for weed control is, over time, often less expensive than using herbicides, the Lammings find that most people have loftier reasons for hiring them. “More and more communities are looking to be good stewards of their land,” Lani says. Suzanne Silverthorn, a spokeswoman for Vail, Colorado, where the Lammings’ goats grazed last summer, says, “Cost did not drive our decision. We had been getting negative feedback from the community about our herbicide program and we’re looking for an alternative. The goats were just what we wanted. They did a great job.”