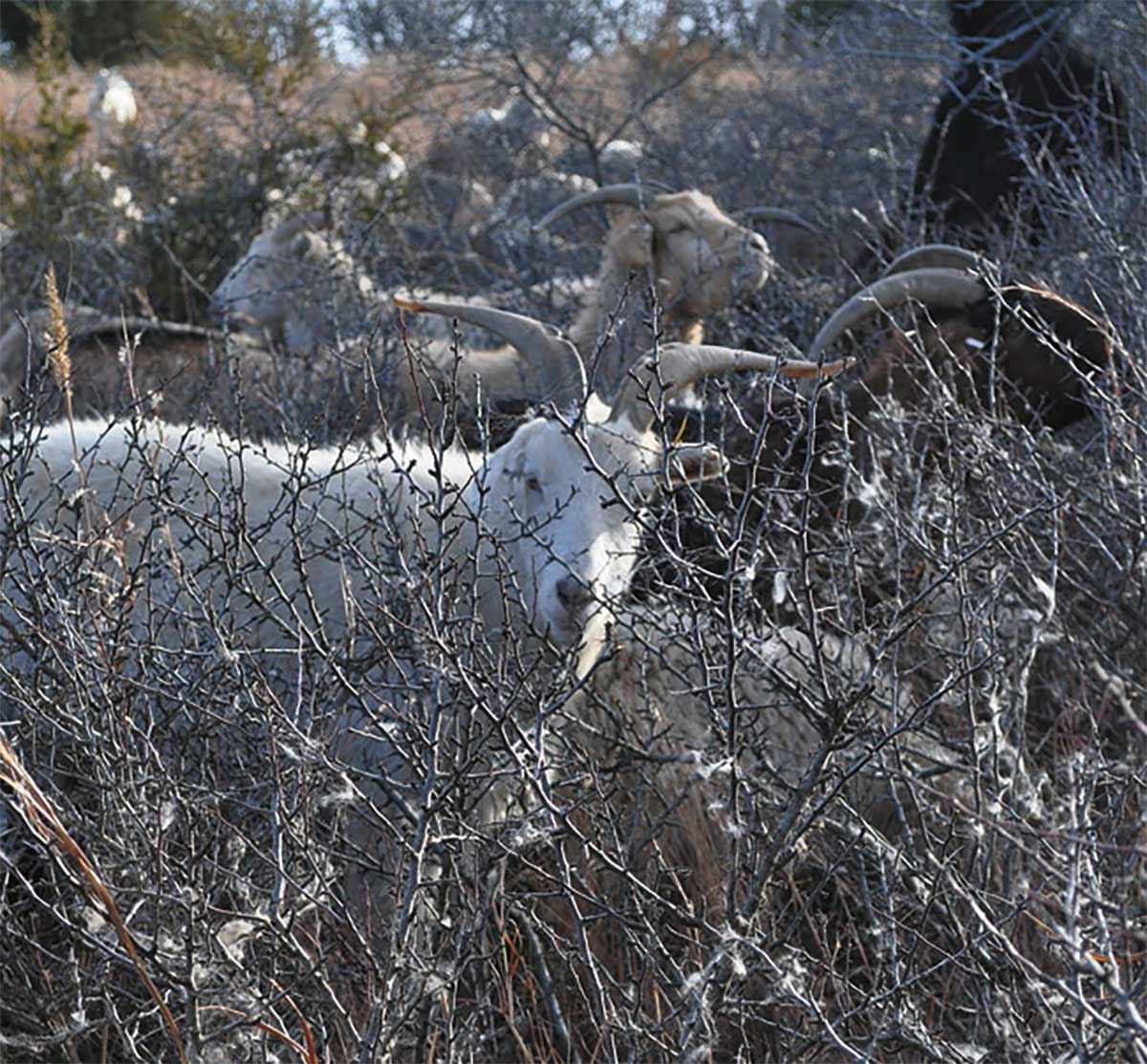 For her land restoration business, Lani Malmberg uses a tool that can perform 7 different tasks.

It can aerate, till, mulch, germinate seeds, irrigate, fertilize and perform weed control. But best of all it’s self-propelled.

Malmberg is known as the gypsy, goat lady.

She travels around the country, so far mainly in the Rocky Mountain west, with a herd of 1,000 to 2,000 goats providing alternative weed management and natural land restoration.

“Everything I own either has 4 legs or 4 wheels, so we can go to where the work is,” she said.

Because of the recent recession, her herd count is around 1,200 these days. But when it comes to kidding time this spring, which will be around April, Malmberg said, “we can quickly get back up to 1,800 if we want.”

For the past few weeks, Malmberg has been in Woodward with 380 of her goats working on removing decades worth of dead growth from 40 acres along the Highway 270 and Western Avenue intersection.

The News met with her on Thursday to discuss her innovative approach to land restoration.

“It’s a family business,” Malmberg said, noting that she started it with her 2 sons 15 years ago.

In fact, one of her sons currently has the rest of the herd in Cheyenne, Wyo., working on another job.

Having her sons involved with the business is one of the main reasons that Malmberg started “Goats Eat Weeds.”

“It was about hanging on to my values,” she said, noting those values were “keeping my kids with me” and to be ranching, working outside with animals.

Having grown up around cattle, Malmberg originally wanted to be a cattle rancher.

But having the unfortunate circumstances of “being born a girl and being born second, I didn’t have a lot of opportunities,” she said.

So she tried to make her own opportunities. However, after having no success with cattle, she eventually stumbled onto goats.

It was the result of her continued studies as she earned a bachelor’s degrees in environmental restoration and in biology with an emphasis in botany and then a master’s degree in weed science from Colorado State University in Fort Collins, Colo. back in the early 1990s.

During research for her degrees, Malmberg said, “I had read about how well goats eat weeds.”

“I thought that somebody should make a business using goats to offer an alternative to machines and chemicals,” she said.

She thought it was a good idea because machines can’t always get everywhere, while goats can “graze on 89 percent vertical cliffs.”

In addition, she said, “chemicals don’t work; of course they don’t because the chemical company wants you to buy more chemicals next year.”

Then things just sort of fell together, Malmberg said.

“When the boys and I ran across this herd of 100 cashmere goats, we gathered up all the money we had and we bought them,” she said.

She said she got lucky in starting her business when she did, because “people were ready.”

“That was at a time when people started to question chemicals and the dangers of chemicals in our air, water and soil and the impact that was having on us,” Malmberg said.

Although people almost immediately welcomed her service, Malmberg’s new venture didn’t come without some curves in the road. Mainly those were learning curves.

Until 1996, her entire livestock experience had been with cattle.

“I had never even seen a goat in real life before,” she said.

Malmberg wasn’t even sure how to handle goats and at first treated them as she would cattle.

But she quickly learned “goats are the complete opposite of cows.”

She already knew that goats’ dietary preferences were different, which is why she uses them for land restoration.

“They have a different mix of bacteria and enzymes in their guts,” she said, noting that is what allows them to eat “anything poisonous or poky.”

But after “following them around taking notes,” Malmberg said she soon learned how much more intelligent goats are and that they are a much more tightly herding animal.

She used that information to use her goat herd more fully. Because not only do the goats eat weeds and other brush that cows and other livestock won’t, but through digestion they recycle that material into organic fertilizer. Then through the natural movement of the herd, they work that fertilizer into the soil.

Or with the help of Patch, the 9-year-old Border Collie who Malmberg said is the “real boss” of the operation, and her other dogs including “second-in-command” Fran, she said she get the goats to actually till the soil with their split hooves. With a simple command, the dogs quickly set to work rounding up the goats and sending them wherever Malmberg wants them, their hooves turning up the soil as they go.

Then with their 102 degree body temperature, the goats can actually help to germinate seeds in the ground when they all lie down together to rest in their close-knit group, she said.

As far as the goats’ intelligence, Malmberg said that is what has helped her business to continue to survive and succeed for 15 years. Because if the goats weren’t smart enough to know that she was going to take care of them and provide work for them, then they might easily escape the temporary fences she uses to contain them.

“A large tumbleweed could knock over the fence and they could get out,” she said, noting that is one of her biggest fears about their current location, since it is so close to the highway.

However, she said the fence has gotten knocked over on other jobs “and they didn’t seem to notice.” Because the goats know that she’s going to come every day and move them to another acre of land with more food, she said.

As far as Malmberg is concerned her enterprise is actually a 3-way partnership between herself, her goats and her dogs and it takes all of them working together to keep Goats Eat Weeds going.

BEING A GOOD STEWARD

If you consider the clients, then Goats Eat Weeds becomes a 4-way partnership, Malmberg said.

Not only are the clients important in providing Malmberg and her goats with business and thus income, but they are important partner in the work itself because Goats Eat Weeds is a service industry.

Because it all depends on the landowner’s goal, what Malmberg has her goats do to achieve that goal.

“Everybody’s goal is different,” she said, noting “what I do is ask them, ‘which plants do you want here and why?’ Then I design a plan so those plants are the best competitors.”

Then the goats take out all the bad, unwanted plants, crushing seeds as they chew to help prevent those plants from coming back before preparing the land for new plants, she said.

“My clients are typically 2 types of people,” Malmberg said. “One is that they’ve tried everything and nothing’s worked including chemicals; and the second who say, ‘I don’t want to spray any chemicals period.’”

La Rita Mason, the owner of the land that Malmberg’s goats are currently working on, is somewhere in between.

Mason, who was raised in Woodward, is now looking to sell or lease her 40 acres since she lives in Amarillo.

However, she said she was “concerned I might not get the land sold because people couldn’t see it, because there is so much overgrowth.”

Back in the 1960s, Mason said the county or some other agency provided brush beating for the property.

“But then the county was no longer able to perform that service and we couldn’t find anyone else to come in and do it,” she said.

Then Mason just happened to be staying “at another home of mine in Manitou Springs, Colo.” a few months ago, when Malmberg and her goats were in the area working on weeding a community garden.

Mason learned about it through a newspaper story written in the Colorado Springs Gazette.

The article piqued her interest and she went by to visit Malmberg, who wasn’t around at the time, so she just left a note, thrown into Malmberg’s 30 foot by 8 foot camper

“I didn’t hear from her for 2 and a half weeks, so I just thought she wasn’t interested,” Mason said.

But it just took that long for Malmberg to discover her note, which had been blowing around on the floor of her trailer.

“From our first phone conversation, I was impressed with her,”Mason said.

But perhaps what she was most impressed with, beyond Malmberg’s knowledge and experience, was the fact that the goats offered an environmentally-friendly solution to her overgrowth problem.

Having just built a LEED silver certified home in Amarillo, Mason said she had become “more aware of the footprint we make on our environment.”

With an outlook of “what can we do from a green standpoint to improve the land and buildings we are associated with,” Mason said she felt’s Malmberg’s goats were the perfect way for her to be a “better steward of the land.”

“Whether I can get it sold or not, this at least has got the land in better shape,” she said of the progress that has already been made by Malmberg’s goats.

For Malmberg that is what it is all about.