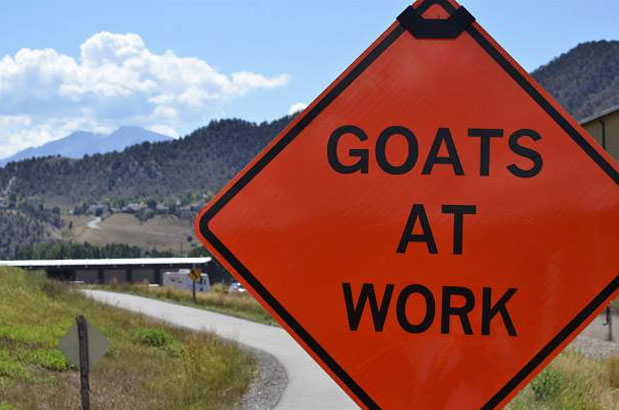 The “goats at work” signs along the bike paths in Vail, Colorado aren’t a joke. They’re a sign of the environmentally friendly times.

The goats were hired by the town to do a job munching on noxious weeds. They’re seen as an environmentally friendly alternative to herbicides.

Lani Lamming owns the herd of more than 600 goats. Lamming, not the goats, is also working on seeding the area with natural plants to compete with the weeds. She says these natural methods work much better than chemicals.

Lamming, who holds a master’s degree in weed science, says the goats can sense the weeds long before people see them and apply chemicals.

“And they’re better at vegetation management because there is no politics,” she adds.

The goats are hemmed in by an electric fence to keep them from wandering.

Lamming’s company, in business for four years, charges $1 per goat for each day, plus the cost of shipping. And she isn’t the only one in this line of work.

A company based near Sacramento, California, Goatweedeaters.com, has been in business for three years, renting South African Boer crossbreeds to get rid of weeds and reduce fire risk.